How a Cathedral Speaks 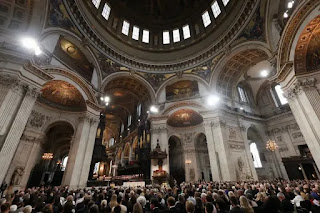 There has been a cathedral – or at least a church – dedicated to Saint Paul on London’s Ludgate Hill since 604 A.D. The current Saint Paul’s Cathedral, famously designed by Sir Christopher Wren in the aftermath of the Great Fire of London, was consecrated in 1697 and has since served not only as the seat of the Anglican Bishop of London but also of such great state occasions as the state funerals of the Duke of Wellington and Sir Winston Churchill, Queen Victoria’s Diamond Jubilee, and Queen Elizabeth II’s four great Jubilee services. (I still remember attending a magnificent Evensong service there on New Year’s Day 1993.) Yesterday, Saint Paul’s was the site of a unique religious service memorializing the late Queen Elizabeth II (photo). Although the Prime Minister and other government officials were present and God Save the King was fervently sung at the end, it was not a state occasion. It was, apparently, open to the public; and, from the appearance of the congregation, it was indeed attended by a wide cross-section of Londoners.

Of course, that is what a cathedral is supposed to be – a spiritual center for a city at all times but especially at moments of major meaning for the city’s residents. The closest I ever came to experiencing that was the Mass we celebrated here at Saint Paul the Apostle Church in New York 21 years ago, a few days after the 9/11 terrorist attack. That was the one occasion when I have seen that great church so filled, filled to capacity, filled as it was designed to be.

All too often in contemporary society, decreasing church attendance has become almost an excuse of sorts for churches to, in effect, disappear – conducting fewer services, in some cases hardly being open at all. Talk about hiding one’s light under a bushel (Matthew 5:14)! Yet the point of any church is, first of all, to be there, a sacred place for people to come to in their time of need and, even when people aren’t there, to show that God is there with them in their need. Occasions like yesterday’s moving service at Saint Paul’s in London remind us of this precious purpose and function of churches, even – perhaps especially – in a society which increasingly has forgotten what churches are for and why we build and consecrate them as places special and set apart.

The London service was especially moving because of its setting and its congregation, but also because of its timely and counter-cultural messages. To a congregation of ostensibly ordinary Londoners, the Bishop of London, Dame Sarah Elisabeth Mullally,  herself a former nurse, preached eloquently about the Queen’s strong sense of vocation, symbolized by her anointing at her coronation. How often in today’s world of individual autonomy and familial and institutional dysfunction do we hear about long-term commitment to anything, let alone a spiritual commitment to one’s calling in life? Yet, few features of modern individualism have more impoverished our present time and place than our diminished sense of dedication to a vocation in life, whether that be a religious vocation or a secular calling. Queen Elizabeth’s devotion to her vocation is widely admired. How widely do we make the connection and apply that lesson to our own lives and to the duties that befall us in our state of life?

Finally, in an era when praying for the dead has increasingly degenerated into a celebration of life, largely detached from an acknowledgement of any ultimate purpose of life, in this increasingly secular time and place, yesterday’s London service was an unabashed profession of Christian faith regarding the purpose of both life and death. How often do we hear, as we did yesterday, Paul’s words in Romans 14 read to a world-wide audience by a country’s Prime Minister? She read: We do not live to ourselves, and we do not die to ourselves. If we live, we live to the Lord, and if we die, we die to the Lord; so then, whether we live or whether we die, we are the Lord’s. »

Not for the first time in its almost 14 centuries, Saint Paul’s Cathedral served its purpose and spoke to its surroundings.

The Making of Ex-Christian America

The Making of Ex-Christian America

A Cheer for British Democracy 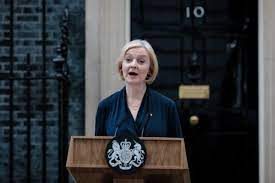 A Cheer for British Democracy 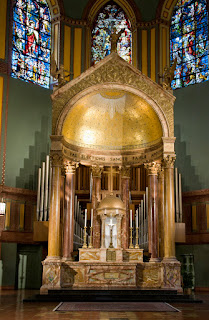